Beyond the Pilgrims to George Washington

Special Note: This article, along with considerable additional information, is included in Jim’s Book “Thanksgiving Day – Religious to Secular” available for purchase in Paperback and FREE in eBook format at this link:  Jim’s Books

This is the second in a series of four articles on the history of Thanksgiving Day in the USA. In Part 1 of this series of articles (The Pilgrims), I covered the background of how a day of Thanksgiving took root with the Pilgrims in the Plymouth colony in 1621. In this second article, I will highlight the period of time beyond the Pilgrims through the early years of the birth of the United States.

Following the Pilgrims’ religiously based Thanksgiving celebration, God worked through many other early colonists in North America such as governors, clergy, military leaders, the Continental Congress, and ultimately President George Washington to observe a day of Thanksgiving to Almighty God for His mercy, providential care and manifold blessings.

First let’s review and discuss some key scriptures that will open the eyes of our hearts so we can better understand what it means to give thanksgiving to God.

Scripture: (all NKJV unless otherwise noted)

Philippians 4:6 – 6 Be anxious for nothing, but in everything by prayer and supplication, with thanksgiving, let your requests be made known to God;.

Psalm 107:8-9 – 8 Oh, that men would give thanks to the LORD for His goodness, And for His wonderful works to the children of men! 9 For He satisfies the longing soul, And fills the hungry soul with goodness.

Psalm 105-1-5: – 1 Oh, give thanks to the Lord! Call upon His name; Make known His deeds among the peoples! 2 Sing to Him, sing psalms to Him; Talk of all His wondrous works! 3 Glory in His holy name; Let the hearts of those rejoice who seek the Lord! 4 Seek the Lord and His strength; Seek His face evermore! 5 Remember His marvelous works which He has done, His wonders, and the judgments of His mouth.

Psalm 69:30 – 30 I will praise the name of God with a song, And will magnify Him with thanksgiving.

Colossians 2:6-7 – 6 As you have therefore received Christ Jesus the Lord, so walk in Him, 7 rooted and built up in Him and established in the faith, as you have been taught, abounding in it with thanksgiving.

As the new world settlers established their colonial homes and towns up and down the eastern North American continent, they also built churches. There they regularly and collectively worshiped God and confidently petitioned Him for His divine providence (compare Philippians 4:6). Their religious background influenced the establishment of their laws and daily conduct. The Bible served as their guide. Life was hard and simply surviving was often their most immediate objective. They supported and drew strength from God and each other.

While many of the colonists were not religious per se, most demonstrated a measure of Godliness. The devout openly practiced their faith in everyday life. It was natural for them to continuously give praise and thanksgiving to Almighty Jehovah God. They were indeed grateful to be in a place generally free from the often corrupt state mandated religions, persecution and intolerance so common in the European homelands they left behind. Amidst their difficult lives, they regularly practiced the Bible’s teachings to “… give thanks to the LORD for His goodness, And for His wonderful works…” (Psalms 107:8). Without many of the necessities of life they depended on God to satisfy the longing of their souls and fill them with His goodness (compare Psalm 107:9). In their worship they sang hymns of thanksgiving and praise glorifying God remembering the “marvelous works which He has done, His wonders, and the judgments of His mouth” in accordance with Psalm 105:1-5 and Psalm 69:30. 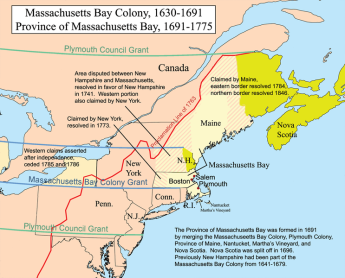 History shows that the Massachusetts Bay Colony began their observance of a Thanksgiving Day in 1630 and continued frequently thereafter until 1680. The Connecticut Colony first celebrated Thanksgiving Day in 1637. Charlestown, located on the Charles River and much later (1874) would become a part of Boston, first celebrated their Thanksgiving Day in 1671 by decree of the town’s governing council. Dozens of other settlements were founded in what is now Massachusetts including Boston (1630), Concord (1635), Framingham (1647), Dunstable (1656), Marlborough (1660) and Worcester (1673). The local church was usually one of the first structures to be built in the newly settled communities. Over time as these and other colonial settlements were established, many designated a day of Thanksgiving in honor of a military victory, the adoption of a constitution, or an exceptionally bountiful harvest.

The 1700’s ushered in significant exploration and territorial expansion by the English, French, Dutch and Spanish. Amidst this expansion “The French and Indian War” (referred to as “The Seven Years War” in Europe) took place (1754-1763) between England and France. The colonies fought on the side of England. The British eventually prevailed and took possession of most of the French territories in North America giving a great deal of pride to the colonists. George Washington served as a military leader in support of the British in this war, experiencing what would become famous victories and famous defeats. The war was expensive for England and they began to impose significant taxes on the colonies to help cover the war costs causing growing division with the colonists.

The “taxation without representation” concept imposed by Britain helped bring about the unification of the colonies and they founded the First Continental Congress in 1774. The Congress collectively aired their grievances to the British and sought a halt to the enforcement of the Intolerable Acts. The British paid no attention to the request leading to the establishment of a Second Continental Congress, the appointment of George Washington as the Commander of the Continental Army, the Declaration of Independence (1776), and a hard-fought American Revolutionary War (1775-1783).

The defeat and surrender of British General Burgoyne at Saratoga ended the American Revolutionary War. At the request of the second Continental Congress, Commander Washington proclaimed a national day of Thanksgiving and celebration for all thirteen colonies to be observed in 1777. George Washington was later elected as the first President of the United States of America (1789-1797).

On October 3, 1789 President Washington issued the first proclamation for the USA to observe Thanksgiving Day on Thursday, November 26, 1789. The texts for both of Washington’s proclamations are included below for your reference. As you read it, you can’t help but note the multiple references to the providence of Almighty God, His mercy and His protection. The observance of a national Thanksgiving Day for the USA was now firmly in place as both a religious and a secular day with devotion and thankfulness to God at the center of the day’s activities.

Digressing a bit, in approximately 63 AD Paul wrote a letter to the recently established church in Colossae, a small and insignificant market town. This church was established by Paul’s fellow servants in ministry, Epaphras and perhaps Timothy (see Colossians 1:7-8). Colossae was located in the Roman province of Asia, an area now included in the country of Turkey and approximately 120 miles east of Ephesus. Paul advised that as followers of Christ Jesus The Lord they should “… walk in Him, rooted and built up in Him and established in the faith … abounding in it with thanksgiving (Colossians 2:6-7). I would like to think that these words from God through Paul were acted out by most of those early colony leaders and settlers based upon what I have learned of the times. I can certainly say Paul’s advice is just as sound for us today as well.

Over the past few weeks in researching and praying over this article, God has blessed me with a new and expanded appreciation for the history of Thanksgiving Day. I hope that it will do the same for you. Please join me in this prayer:

Lord God, I thank You for your love and guidance on my life. I give you praise and thanksgiving for Your goodness and mercy. I pray for your continued leadership and that the mind of Christ will be in me as I continue to research and write this series of articles. Thank you Lord for saving my soul. Thank you Lord for making me whole. Thank you Lord for giving to me, thy great salvation so rich and free. In the mighty name of Jesus, The Christ. Amen and Amen!!

In Part 3 of this series of articles I will continue to examine the history of Thanksgiving in the USA from the time of the President George Washington through President Abraham Lincoln in 1863.

Below is a summary of key dates, people, events and public proclamations related to Thanksgiving Day for the period under study. The primary source for the information in this table was compiled from the online encyclopedia, Wikipedia.

Jim Davenport resides in the USA in Northeast Georgia, is a member of a Southern Baptist Church and is a retired Christian business man. Jim and his wife Charlotte have one son and daughter in law, Keven and Amy, four grandchildren – Ashlyn (Davenport) & Josh Murphy, Mason & Rebecca (Knight) Davenport and four great-grandchildren. Jim and Charlotte own a mountain get-away home located on Lookout Mountain in Alabama where they spend many spring, summer and fall days working in their raised bed organic garden. Jim has served as a Deacon and Trustee in his local church most of his adult life and on the Executive Committee and Finance Committee of the Board of Trustees of Shorter University, an intentionally Christian institution located in Rome, Georgia. Jim has a passion for the word of God and has always believed that Christian principles should guide every aspect of his life. He also loves Christian music and often served as a tenor soloist in his church. One of the highlights of his life was the nearly 20 years he spent singing with The Good News, a Southern Gospel quartet. Jim served as an Information Technology professional his entire working career of 50 years holding senior positions in and consulting with hundreds of world-class organizations in the United States, Canada, Europe, Central and South America, Australia and New Zealand. Jim remains as President and CEO of InfoSys Solutions Associates, Inc. and is a retired partner of IT Governance Partners, LLC, both of which are “Trusted Advisor” technology and business consulting firms. Jim has authored a number of books available at www.jimdavenport.me/jims-books. His blog has ben read by readers from more than 170 countries. Jim holds both a BS and an MS in Mathematics from Georgia State University in Atlanta, Georgia and completed Management Development Training at Emory University in Atlanta, Georgia.
View all posts by jimdavenport →
This entry was posted in Bible Studies, Christian Devotions, Southern Gospel Music and tagged Bible, Christ, Christian, Christian living, Continental Congress, Elias Boudinot, Franklin D. Roosevelt, God, history of thanksgiving, Jim Davenport, Lifestyle christian commitment resolutions, Lord, Massachusetts Bay Colony, Pilgrims, Religion and Spirituality, thankfulness, thanksgiving, thanksgiving devotion, The Good News, United States. Bookmark the permalink.