Special Note: This article, along with considerable additional information, is included in Jim’s Book “Thanksgiving Day – Religious to Secular” available for purchase in Paperback and FREE in eBook format at this link:  Jim’s Books

In what now seems to be the ancient past, many of the early Europeans who risked their lives to settle the lands of the Americas were dependent on God and openly thankful for His blessings. The celebration of a day or season of Thanksgiving was a religious observance accompanied by worship, prayer, a hearty meal and a community attitude of thankfulness. In modern times the day or season of Thanksgiving that started in the USA as a religious observance has transitioned over time to a primarily secular long weekend spent with family and friends while over-eating, watching football and shopping like crazy.

Clearly not all people in the Unites States have lost their focus on God during the traditional Thanksgiving season, but the majority of its citizens have either lost sight of the original purpose for the celebration or feel they owe nothing to God for His divine providence. In order to strengthen our understanding and focus on the religious nature of the Thanksgiving season, I have decided to expand on my articles on thankfulness and thanksgiving.

Scripture: (all NKJV unless otherwise noted)

James 1:17 – Every good gift and every perfect gift is from above, and comes down from the Father of lights, with whom there is no variation or shadow of turning.

Psalm 107:8-9 – 8 Oh, that men would give thanks to the Lord for His goodness,
And for His wonderful works to the children of men! 9 For He satisfies the longing soul,
And fills the hungry soul with goodness.

The history of days of Thanksgiving and the celebration of the harvest dates back thousands of years. Such days were observed by almost every religion in their own fashion in all of the parts of the ancient world. The Jews collectively observed, and still do, a number of seasons of thanksgiving and worship honoring such events as the Exodus (Passover), the Jewish New Year (Rosh Hashanah), the festival of lights (Chanukkah), and the day of atonement (Yom Kippur).

Pilgrims celebrate the traditional first Thanksgiving at Plymouth in 1621

As most every USA youngster of school age can tell you, the observance of a day thanksgiving in the USA dates back almost 400 years to the settlement at Plymouth in the “new world” by a group of English Puritan Separatists and others. The Puritans were bound for a predetermined location in Virginia but settled for the Plymouth location near the mouth of the Hudson River in what is now Massachusetts. There they would practice their faith conservatively and freely without persecution. These early settlers much later (1799) came to be known as the Pilgrim Fathers, Pilgrims for short. This first observance by those in Plymouth in October of 1621 commemorated the bountiful harvest and provided a special time to remember God’s goodness and care for them.

In 1623 an official day of Thanksgiving was declared by the colony Governor, William Bradford, and observed by all in the Plymouth colony on Thursday, November 29. Here is Bradford’s proclamation:

Inasmuch as the great Father has given us this year an abundant harvest of Indian corn, wheat, peas, beans, squashes, and garden vegetables, and has made the forests to abound with game and the sea with fish and clams, and inasmuch as he has protected us from the ravages of the savages, has spared us from pestilence and disease, has granted us freedom to worship God according to the dictates of our own conscience.

Now I, your magistrate, do proclaim that all ye Pilgrims, with your wives and ye little ones, do gather at ye meeting-house, on ye hill, between the hours of 9 and 12 in the day time, on Thursday, November 29th, of the year of our Lord one thousand six hundred and twenty-three and the third year since ye Pilgrims landed on ye Pilgrim Rock, there to listen to ye pastor and render thanksgiving to ye Almighty God for all His blessings.

1 Chronicles 29:14 clearly states that EVERYTHING comes from God. It is ALL His … without exception! It is apparent to me that the Pilgrims knew that fact very well. So much had been against them from the beginning of their journey. But they remained faithful, recognizing their dependence upon God for their ultimate success. Their departure from Plymouth England had been repeatedly delayed and pushed their arrival in the new world into late fall when constructing permanent housing and other necessary facilities on land would be severely hampered by winter weather. Their sixty-five day ocean crossing in extremely cramped quarters led to scurvy, dysentery and other dreaded diseases. Due to those diseases and the horrid housing conditions that first treacherous winter, the immigrants number dwindled from 102 departing Plymouth England to 57. They had buried 45 of their family members and friends, nearly half of their population. Yet they were thankful for God’s mercy, protection and care! How could they have been so thankful? Could the answer be that the freedom to worship the God they loved in accordance with the teachings of the Bible without persecution outweighed all of the negatives? I think so!

When we reach the realization that God owns it all and that every good and perfect gift comes from Him (James 1:17), we look at life very differently. Our minds are not filled with thoughts and memories of OUR accomplishments. Rather, we realize that our thoughts and memories are the result of that which GOD has allowed to be accomplished through us.

Psalm 136 speaks to God’s goodness and His forever enduring mercy (loving-kindness). See my recent article An Attitude of Thankfulness. Temporary trials and hardships can even be blessings. Psalm 107:8-9 gets right to the point advising “Oh, that men would give thanks to the Lord for His goodness, And for His wonderful works to the children of men! For He satisfies the longing soul, And fills the hungry soul with goodness.“

Christian, our religious freedom is under constant attack in today’s society. Even the government is walking a fine line by making decisions that infringe upon the rights of religious bodies … in effect, persecuting those religious entities. For example, the Patient Protection and Affordable Care Act (aka, ObamaCare) mandates that birth control and abortion be covered by insurance programs even though it goes directly against their religious beliefs. Catholic organizations and even some private entities (such as Hobby Lobby) all over the country have filed suit against the USA government for the contraception mandate. Is this a form of religious persecution? How far will religious institutions be pushed away from their basic beliefs to accomplish a governmental purpose? 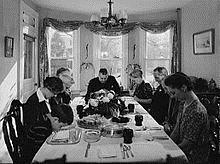 An American family giving thanks on Thanksgiving Day in 1941

When you and your family and friends gather this Thanksgiving I encourage you to focus on God and His bountiful blessings on your life and that of your family and friends … even through trials and tribulations. Keep the emphasis on the religious side of thankfulness instead of on the secular. It is not too late to influence how you will observe the four-day Thanksgiving holiday weekend. You can take the lead in this effort. How about setting up a specific time around the table, perhaps before the prayer of thanksgiving, and let each person at the table openly and specifically share how thankful they are for God’s blessings in their lives. After the meal, defer the clean-up for a while and engage the group in happy and uplifting conversation that keeps the focus on God … not eating, not football, not shopping. Remind everyone of how the Pilgrims faced true hardships, how many lost their lives seeking religious freedom and protection from persecution, yet still kept their eyes on the Lord.

I close Part 1 of this series of articles with a portion of Dr. Billy Graham’s response to a question submitted on a related subject. “Even if you’re going through hard times, thank God for His presence with you. Most of all, thank Him for Jesus Christ, who gave His life so you could have the greatest gift of all — the gift of eternal life. Have you accepted that gift? If not, make this a day of true thanksgiving by opening your heart and life to Christ.“

In Part 2 of this series I will briefly examine the history of Thanksgiving in the USA from the time of the Pilgrims to the presidency of George Washington.

Jim Davenport resides in the USA in Northeast Georgia, is a member of a Southern Baptist Church and is a retired Christian business man. Jim and his wife Charlotte have one son and daughter in law, Keven and Amy, four grandchildren – Ashlyn (Davenport) & Josh Murphy, Mason & Rebecca (Knight) Davenport and four great-grandchildren. Jim and Charlotte own a mountain get-away home located on Lookout Mountain in Alabama where they spend many spring, summer and fall days working in their raised bed organic garden. Jim has served as a Deacon and Trustee in his local church most of his adult life and on the Executive Committee and Finance Committee of the Board of Trustees of Shorter University, an intentionally Christian institution located in Rome, Georgia. Jim has a passion for the word of God and has always believed that Christian principles should guide every aspect of his life. He also loves Christian music and often served as a tenor soloist in his church. One of the highlights of his life was the nearly 20 years he spent singing with The Good News, a Southern Gospel quartet. Jim served as an Information Technology professional his entire working career of 50 years holding senior positions in and consulting with hundreds of world-class organizations in the United States, Canada, Europe, Central and South America, Australia and New Zealand. Jim remains as President and CEO of InfoSys Solutions Associates, Inc. and is a retired partner of IT Governance Partners, LLC, both of which are “Trusted Advisor” technology and business consulting firms. Jim has authored a number of books available at www.jimdavenport.me/jims-books. His blog has ben read by readers from more than 170 countries. Jim holds both a BS and an MS in Mathematics from Georgia State University in Atlanta, Georgia and completed Management Development Training at Emory University in Atlanta, Georgia.
View all posts by jimdavenport →
This entry was posted in Bible Studies, Christian Devotions, Southern Gospel Music and tagged Bible, Billy Graham, Christ, Christian, Christian living, God, history of thanksgiving, Jim Davenport, Lifestyle christian commitment resolutions, Lord, Massachusetts Bay Colony, Mayflower, Mayflower compact, Pilgrim, Pilgrims, Plymouth, Plymouth colony, Puritan, Religion and Spirituality, Rosh Hashanah, Separatists, thankfulness, thanksgiving, thanksgiving devotion, The Good News, United States, Yom Kippur. Bookmark the permalink.