Listen to The Good News 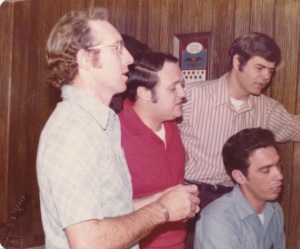 The Good News was a Southern Gospel Quartet that sang together for twenty years. The group originally formed while all of the singers were part of the Pine Lake Baptist Church in Stone Mountain, Georgia.  The core group consisted of four men:  Ray Shaw, Charles Thomas, Jim Davenport, and Arnold Johnson.  These men had differing backgrounds and professions, but each had a passion for the Lord and for Southern Gospel music.  These four men remained in the quartet from beginning to end. 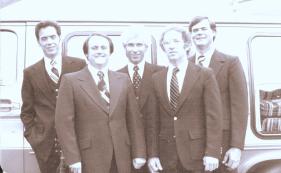 L-R: Ray Shaw, Jim Davenport, Ron Hostetler, Charles Thomas, Arnold Johnson circa 1983. Arnold’s Van was our transportation for the five of us including all of our equipment.

Two additional members joined over time:  Ron Hostetler on piano and 1st Tenor and Mark Fuller on the Piano.  The Quartet regularly led services all over Georgia when Ron was part of the group.  He traveled heavily on his daytime job working for a pharmaceutical company.  Over the years the group had the privilege of singing along with other well-known groups such as the Sunny South quartet and the Dixie Echoes.

Mark Fuller went on to play the piano for Eva Mae Lefevre  in her concerts in her latter years and is currently a solo artist with a number of excellent gospel recordings.  Ray Shaw is retired but continues to sing year round presenting a mixture of gospel music, country songs, some old favorites and songs everyone older than 40 will remember.  Ray’s concerts are well attended and he has made many, many recordings.    Charles Thomas fought a valiant battle with colon cancer and went home to the Lord at the age of 72 in February, 2013. Charles loved and entertained his children and grandchildren in his retirement years at his lake house on Lake Hartwell.  He is sorely missed.    Jim Davenport continued to sing solos at Pine Lake Baptist for years after The Good News retired and he served for years as the song leader during worship services.  Jim currently serves as a Trustee for Shorter University, an intentionally Christian University affiliated with the Georgia Baptist Convention.  Arnold Johnson has served for many years on the Georgia Baptist Hospital Foundation supporting health needs all over the state of Georgia.  Ron Hostetler lives in Atlanta and is still actively employed.

In the summer of 1986 the original core group of four men (Ray, Arnold, Charles and Jim) did a Live Concert at Pine Lake Baptist Church as part of the Summer Concert Series.  Other groups appearing on different Sunday nights included groups such as Newsong and The Speer Family.  The audio recording of the concert will be available below in 6 parts as they are added to youtube.  Unfortunately the concert recording was made through one single microphone located near the congregation and not professionally mixed.  Nevertheless, we trust that the concert will bring back fond memories of the gospel music and worship services of The Good News.  Those memories live on not only in the hearts and minds of those who were part of the group but countless others who heard them sing.

You can listen to the Good News through youtube by clicking on the links below.  Eventually all songs will be available for the recordings shown.

Jesus Will Lead Me – Recorded 1990 featuring: 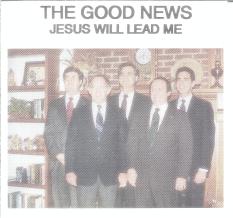 Listen below to Jesus Will Lead Me directly from my blog:

Spreading The Gospel – recorded in 1987 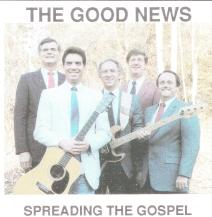 Listen below to Spreading the Gospel directly from my blog:

*** Note that I am looking for a live recording  of one of our concerts that included Ron Hostetler to add to this collection.  If you have one or know of someone at a church where we sang that may have one, I would love to have it.  You can contact me by responding to the comment section at the bottom of this page.  Thanks, Jim Davenport ***

15 Responses to Listen to The Good News