This section of Jim & Charlotte’s Garden provides selected photos and comments on the construction process.

Rusty Chambers of Chambers Construction in Mentone, Alabama served as the Construction Advisor and Manager. He saw the project through from beginning to end. Rusty was invaluable to us. He took our concept and turned it into a reality. Rusty had all of the equipment necessary to haul in the dirt, level the garden apace and make sure that it drained properly from front to back. The ground had too much slope to it so several truck loads of dirt were brought in to gradually level the grade and raise the rear level by about three feet insuring that the garden would drain well.

Rusty and his associate Nathan Henderson, along with other temporary helpers at times including Rusty’s son Logan:

There is no way that we could have ever accomplished this work without Rusty’s tireless efforts. He was patient and professional throughout We are grateful for his contribution to our project and he and his wife Angela are now our dear friends.

Nathan now provides our lawn service maintaining our more than an acre of grass and our five acre field. 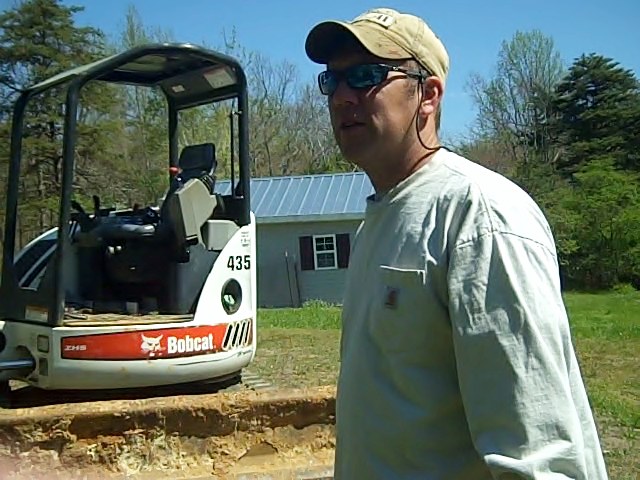 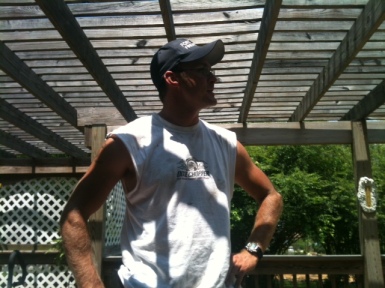 Nathan Henderson – right there with Rusty … all the way … beginning to end. 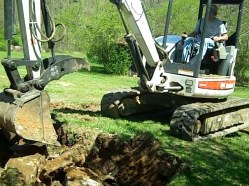 Some of the first scoops. Here Rusty is removing an old cistern that unfortunately had to go to make way for the garden. This thing was extremely well constructed using large slab rocks. I’m not sure how long it had been there. 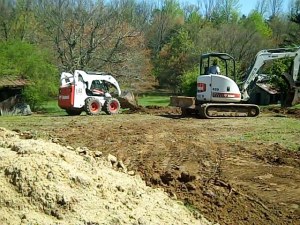 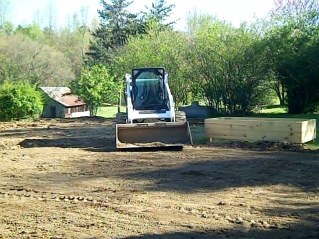 The garden plot is now almost level and slightly sloping from front to back and the boxes will soon be placed in their permanent positions. 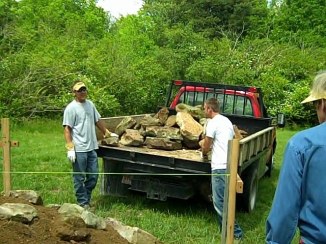 Rusty Chambers and Nathan Henderson unload and place the mountain rock to keep the dirt on the back side of the leveled plot from washing away in a hard rain. 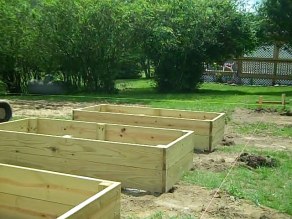 The raised bed boxes were constructed with pressure treated lumber #1 2×10’s, 4×4’s, 2×6’s. Don’t worry about the treated lumber, the chemicals used in the lumber treating are part of a new process that does not leach into the soil affect the surrounding soils. We checked with experts before going this route. We wanted the boxes to last as long as possible … hopefully a minimum of 10-15 year 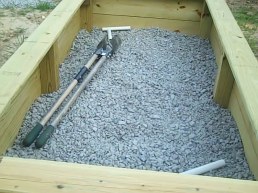 The six 4×4’s in each box extended 4 inches into the soil to stabilize the box and keep it in one spot. Note the 2×6’s on the top of each box forming a sitting bench. On the bottom of each box we stapled 1/4 inch hardware wire cloth to keep varmints from burrowing up from the underside and to keep the crushed rock from sinking into the soil over time. 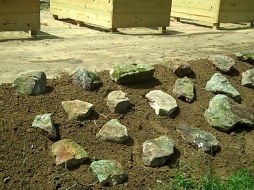 We left space between the mountain rocks on the slope on the back of the garden so that we could plant flowers and herbs and even a few watermelon and cantaloupe vines. 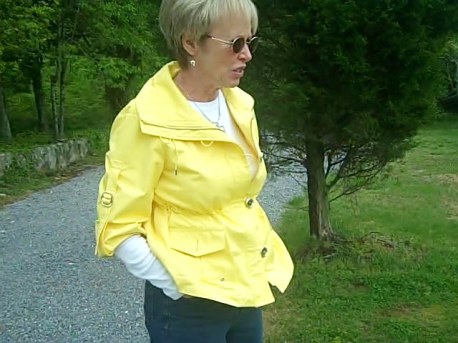 Charlotte inspects the work and is pleased with the progress. 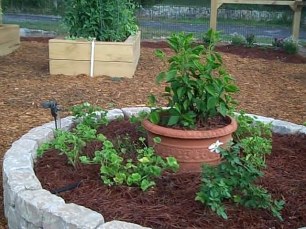 The two circular flower beds were constructed and we couldn’t wait to plant something!  Note the plastic water pipe that is servicing the raised bed in the background. 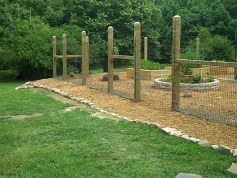 The 7 1/2 foot high fence is completed. We used black vinyl coated wire with 2″x4″ rectangles. Hardware wire with 1/4 inch holes. The hardware wire extended into the soil at the bottom of the fence to a depth of 5 inches. Note the 4 foot walkway around the entire circumference of the garden. Also note that 2-3 inches of cyprus chips have been placed on top of professional grade landscape cloth to minimize weeds and add a pleasant color to the garden. 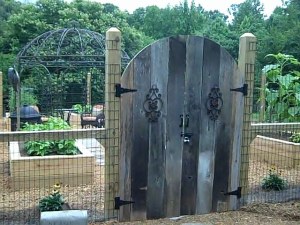 Rusty and Nathan constructed the front garden gate from reclaimed barn wood that was salvaged when we had to tear down one of our fallen sheds.  You can see the open air pavilion in the middle of the garden.  We didn’t want to block the sunlight in any way.  You can see some plants taking shape in the boxes and along the inner perimeter of the fence.  In the left foreground you can see the original R. H. Akins mailbox sitting on the ground.  Ultimately it will take its place on a post to the left of the gate to commemorate the “home place.” 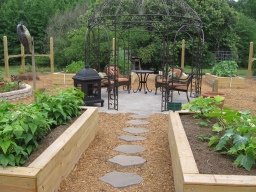 We placed stepping-stones from the gate to the pavilion in the middle of the garden. There are chairs to use when you get tired or when you just want to enjoy the serenity of the garden in the evenings. There is an above ground fire-box on the left side of the pavilion for that late fall fire to warm you when the temperatures turn cooler. 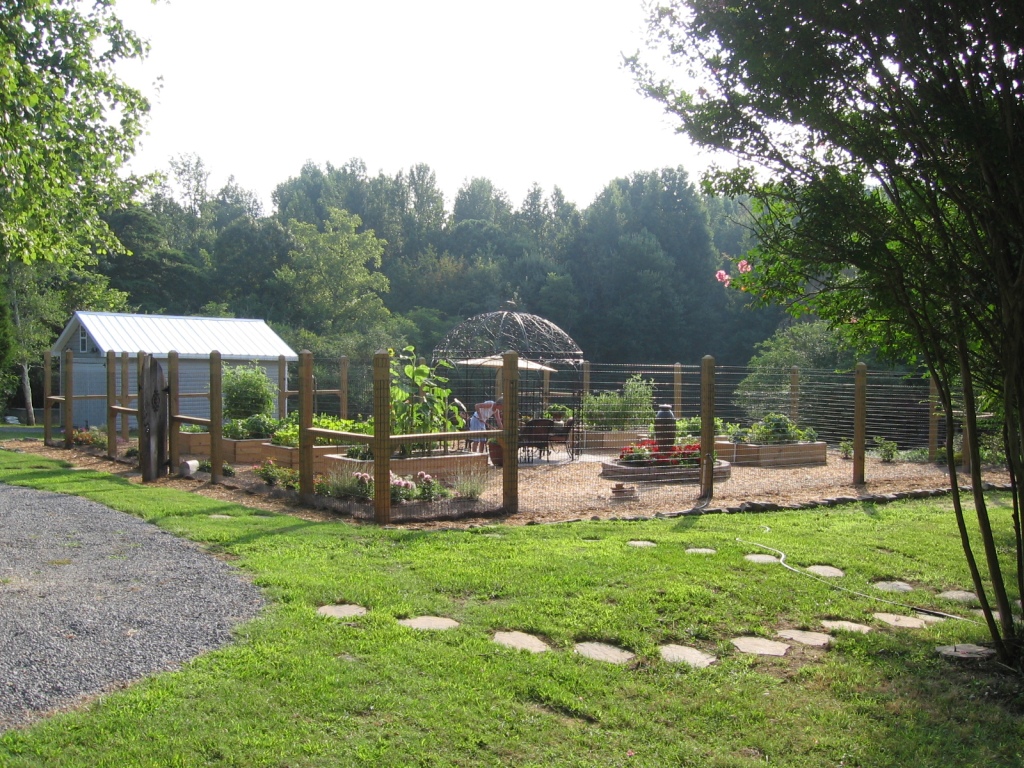 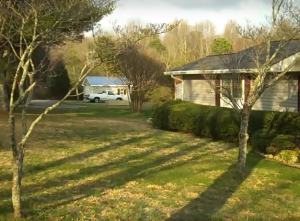 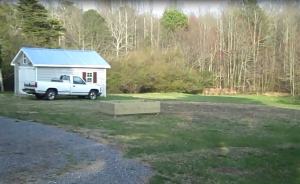 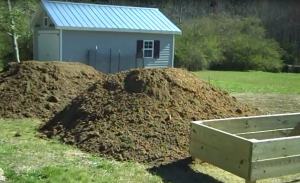 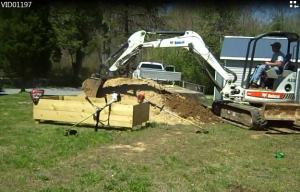 Let’s get that dirt movin’.

You can navigate to other portions of Jim & Charlotte’s Garden using the following links: