Click on the highlighted links to view the video.

*The videos below are either public domain or are properly copyrighted  and available on the internet  and not the property of InfoSys Solutions Associates, Inc.

2017-05-30 – Women and Alcohol: One Glass a Day Linked to Cancer (Wall Street Journal) – Even one small glass of wine or beer a day increases the risk of women developing breast cancer, according to a new report. Even the experts are surprised by the results. WSJ’s Tanya Rivero reports.

2017-03-16 – Champion of Love – One of my all-time southern gospel music favorites is “Champion of Love.”  This rendition was recorded by The Old Friends Quartet in Mobile in 2002.  Wesley Pritchard is the baritone and soloist.  George Younce (bass), Jake Hess (lead), Ernie Haase (tenor) and Garry Jones (piano) make up the rest of the group.  The group only released two projects (Encore – 2001, Feelin’ Fine – 2003).  I have both and have probably played them more than a hundred times.

What makes this recording so special to me is the fact that both Hess and Younce already had significant heart conditions and were performing as members of The Old Friends Quartet with implanted pacemaker/defibrillators.  Hess passed away in 2004 and Younce in 2005. Each spent more than 60 years of their lives praising God through southern gospel music.  Now they are praising Jesus daily in His presence.

I guarantee that you will be blessed by watching and listening to this four minute video.

2015-01-03 – Ft. Payne, Alabama & Desoto State Park in the 1930’s – Alabama Pioneers Video – Today I saw this video on Facebook on the Alabama Pioneers web site.  I was fascinated by the content having heard about that age many times from my father and mother.  Discovering the video was like opening up a magic box full of special treats.  I have often imagined what it was like to live in those days … the Great Depression, the WPA works projects, the hardship on struggling mountain families.  Alabama Pioneers has provided some of the answers with their videos.  Below is what I posted on Facebook when I shared the video:

“During the Depression of the 1930’s my Father and Mother had a business (The Hitchin’ Post) in the nearby town of Mentone. This rural area was hard-hit during the difficult economic times. Small business struggled to survive. Building the park put a lot of men to work and for a while things began to move in a positive direction. After the U.S. entered World War II the area once again was hard-hit. But the rural folk were resilient having carved out a living in the mountains and surrounding valleys. Today Desoto State Park is a reminder of the proud people who homesteaded and settled this beautiful area. Watch the video of the park construction. Perhaps some of your Deep South relatives were part of the WPA teams that worked to build this lasting reminder of our proud ancestors!” 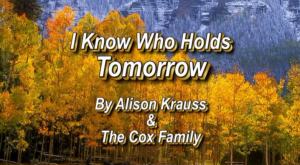 2015-01-02 – I Know Who Holds Tomorrow – Alison Krauss & The Cox Family … As we welcome 2015 we don’t really know what the future holds for each of us … but most certainly God does!  I am comforted by the absolute confidence I have in God that He, and He alone, holds ALL of the future in His strong hands.  I don’t have to worry about the future because I know who holds tomorrow!

Listen to Alison Krauss sing a beautiful rendition of the song I Know Who Holds Tomorrow along with lyrics and stunning scenery.  This was recorded in 1994, long before Alison became famous as a blue grass / country music star winning 27 Grammy awards.   I know that you will enjoy!  One of my favorites.

Matthew 6:25-34 (NKJV) – 25 “Therefore I say to you, do not worry about your life, what you will eat or what you will drink; nor about your body, what you will put on. Is not life more than food and the body more than clothing? 26 Look at the birds of the air, for they neither sow nor reap nor gather into barns; yet your heavenly Father feeds them. Are you not of more value than they? 27 Which of you by worrying can add one cubit to his stature? 28 “So why do you worry about clothing? Consider the lilies of the field, how they grow: they neither toil nor spin; 29 and yet I say to you that even Solomon in all his glory was not arrayed like one of these. 30 Now if God so clothes the grass of the field, which today is, and tomorrow is thrown into the oven, will He not much more clothe you, O you of little faith? 31 “Therefore do not worry, saying, ‘What shall we eat?’ or ‘What shall we drink?’ or ‘What shall we wear?’ 32 For after all these things the Gentiles seek. For your heavenly Father knows that you need all these things. 33 But seek first the kingdom of God and His righteousness, and all these things shall be added to you. 34 Therefore do not worry about tomorrow, for tomorrow will worry about its own things. Sufficient for the day is its own trouble.

2014-12-23 – The End of the Beginning – David Phelps.  This is an amazing performance that will bring joy to your heart.  Perfect for Christmas and Easter!  Don’t miss it!!

2014-06-09 – Clay Christensen on Religious Freedom – Liberty Institute – Clay Christensen speaks on Religious Freedom as an integral part of a functioning democracy.  This short video is a must view for those concerned about the real threats against our basic religious freedoms.  We don’t realize how close we are to losing our Constitutional rights!!

2014-06-18 – Democrats Confirm Saddam Had WMD’s – In their own words Democrats were on board with President Bush that Saddam possessed weapons of mass destruction (WMD’s).  To discredit President Bush, they later adopt the standard line that “there is no evidence that Saddam had WMD’s.”  When the future well-being of our country is at stake, then it is time to put politics aside and do what is right to protect our national interest!

2014-05-30 – Anthony Burger (1961-2006) Tells His Life Story – Anthony Burger was born in Cleveland, Tennessee to Richard and Jean Burger. At age eight months, he was using a baby walker and fell into a floor furnace grill in his house. He suffered third degree burns on his hands, face and, legs. After suffering the burns, Burger’s doctor told his parents he was very likely to not be able to move his hands in the future. Despite the odds, Burger recovered. At the age of five, he was accepted at the Cadek Conservatory, University of Tennessee at Chattanooga. A child prodigy, Burger was playing classical piano repertoire within a few years.  However, Southern Gospel music was Burger’s favorite.  Listen/watch this superlative video and be in awe about the gift that God gave Burger.  Highly recommended.

2014-05-25 – The Path of the Warrior  – A Memorial Day Tribute.  Our freedom has been secured by those so willing to sacrifice themselves for others. May God Bless The families of those who have served so unselfishly. May you and yours have a Happy Memorial Day!  Please don’t pass this one by.  It will bring tears to your eyes!

2014-05-19 – Six Year Old Yo-Yo Champion – This three-minute video will absolutely amaze you.  How can a 6 year old have skills like this?  If more kids played with a yo-yo instead of video games the world would be much better off … I am certain of it.  I played with a yo-yo when I was a boy all of the time but never got close to doing even one of these tricks.

2014-04-11 – Hezekiah Walker Flash Video – recorded in South Five Points in Birmingham, Alabama.  Get ready for a really good presentation of “Every Praise” as it captivates those around the mob and will draw you in as well.  This is worth watching more than once!

2014-04-04 – The Beauty of Pollination – Hummingbirds, butterflies, bees … all sorts of pollinators in flight.  Amazing close-up video that will captivate you from beginning to end.  Note in particular the aerobatics performed by the hummers … it is astounding — just no other words to describe!

2014-03-31 – Archaeopteryx Demo Clip – Personal Flying Machine providing a demo of an amazing personal flying machine that can be pulled on a trailer, assembled in minutes, launched by human leg power and landing in just about any small flat area.  Get ready for some amazing views in this promotion video.  I think I want one!  This originally came to me from my friend Earlene Danner.

2014-02-22 – Oilfield Dodge – a promotional video that shows the ruggedness that was available in 1920 through an amazing vehicle of the times.  Try to imagine yourself riding in this vehicle without shock absorbers!

2014-02-19 – Tower Climbers Working – This incredible video shows workmen climbing to the top of a 1750 ft+ tower to perform maintenance.  As impressed as I am with this video (and you will be too!), can you imagine what it was like for those constructing the tower?  All of these folks have nerves of steel and certainly are not working for minimum wage!  Thanks to my friend Myron Martin for providing this link.

2014-02-01 – Jonathan Winters and The Stick – the most imaginative comedian I have ever witnessed puts on a display of impromptu brilliance that in my opinion no one else could ever duplicate.  While Winters was unpredictable, you could always count on a huge laugh in every one of his performances.  This is timeless!  Enjoy!  Thanks to Earlene Danner for making me aware of this video.

2014-01-30 – Jim’s Skiing Adventure – a fun video of my most recent skiing trip.  Nearby our mountain house is a ski slope – Cloudmont Ski & Golf Resort. This was a great adventure for me (HaHa!). Hope you enjoyed it as much as I did.

2014-01-15 – Paper is not Dead – Short commercial that really gets to the point.  You will really like the message and enjoy the humor of the wife as she really gets the message back to her husband in a very unique way.

2014-01-14 – Trick Shot Titus 3 – Little Titus Can Complete Trick Shots So Awesome, He Even Shocks Celebrities!  Titus is like most other little boys, aside from the fact that he is AWESOME at basketball. The Lord blessed him with this natural gift. It’s so stunning, even crowds of people and celebrities can’t believe it!

2014-01-13 – WOW! Gotta Watch this Drum Line!! Absolutely amazing performance.  Watch it all the way through … it just gets better and better as it progresses and has a light show surprise near the end of the performance.  Guaranteed that you will love this one.

2009-04-12 – The Day He Wore My Crown / Via Dolorosa – This solo by Jim Davenport was recorded during an Easter Drama at Pine Lake Baptist Church on April 12, 2009.  Mrs. Beth Pisani is the accompanist and various members of the Pine Lake Drama Team are the performers in the drama.