Why Are You Afraid?

I was reading a devotion from one of my favorite publications 1  today and was inspired to do a little research.  The focal verse for the devotion is Matthew 8:26 (ESV) –  And He [Jesus] said to them, “Why are you afraid, O you of little faith?” Then He rose and rebuked the winds and the sea, and there was a great calm.

Upon reading that verse my mind immediately raced to the event that prompted this passage.  Jesus concluded His teaching to the crowds in The Sermon on the Mount (Matthew 5-7) and He and His disciples proceeded down the mountain.  The crowds eagerly followed along.  It was then that Jesus performed two significant miracles … cleansing the leper, and healing the Centurion’s servant.  Later that day Jesus went to His disciple Peter’s house where he healed the fever of Peter’s mother-in-law, those possessed by evil spirits, and many others who were sick.

Leaving Peter’s house, the crowds massed around Jesus and He “gave orders” (Matthew 8:18) to His disciples to cross over to the other side of the Sea of Galilee.  After Jesus entered the boat, His disciples followed leaving the crowds behind.

This is the point at which the focus verse from the devotion comes into play.  As Jesus slept on the boat,  “24 … behold, there arose a great storm on the sea, so that the boat was being swamped by the waves; … 25 And they went and woke Him, saying, “Save us, Lord; we are perishing.” 26 And He said to them, “Why are you afraid, O you of little faith?” Then He rose and rebuked the winds and the sea, and there was a great calm. 27 And the men marveled, saying, “What sort of man is this, that even winds and sea obey him (Matthew 8:24-28)?”

After reading this scripture I began to sing out loud a much beloved hymn.  I know it by the title “Peace Be Still.”  The original title of the hymn, written in 1874 with lyrics by Mary A. Barker (1831-1921)  and music by Horatio R. Palmer (1804-1907), was “Master the Tempest Is Raging.“2  You can read the story behind the hymn at this link.  Listen to and sing along with the hymn at this link.

The disciples were afraid, and rightfully so.  They were out on the Sea of Galilee in the midst of a terrible life-threatening storm!  Fearful for their physical death, they awakened  Jesus and pleaded with Him to save them from the ravages of the storm.

Jesus took the opportunity to teach His disciples and us a powerful and eternal lesson.   As Creator and Master of the heavens, the earth and ALL that exists therein, Jesus rebuked the winds and the sea, and there was a great calm!  Mary Barker’s lyrics capture the moment so beautifully:

Master, the tempest is raging!
The billows are tossing high!
The sky is o’ershadowed with blackness,
No shelter or help is nigh;
Carest Thou not that we perish?
How canst Thou lie asleep,
When each moment so madly is threatening
A grave in the angry deep?

I see a parallel in this Hymn for the condemned sinner … lost and without hope … bound for an eternity spent in Hell rather than in Heaven.  The winds and the waves of a life filled with sin are raging all about.  Perishing without hope looks inevitable.  There seems to be no way out.

But there is hope! There is a way out!  Jesus is the Answer!  Accepting Jesus as Savior and Lord is the way out!   Why?  Because Jesus paid the price through His sacrificial death on the cross and His glorious resurrection for the forgiveness of ALL of man’s sins.

How about you?  By admitting that you are a sinner in need of forgiveness and accepting Jesus as your personal Savior, He will calm the winds and the angry waves in your life and fill you with hope for a future … a future in Heaven with Jesus!!

The lyrics of the final verse of Mary Barker offer such great comfort:

Master, the terror is over,
The elements sweetly rest;
Earth’s sun in the calm lake is mirrored,
And heaven’s within my breast;
Linger, O blessèd Redeemer!
Leave me alone no more;
And with joy I shall make the blest harbor,
And rest on the blissful shore.

So, Why Are You Afraid??  If you are not yet a Christian, I invite you to visit this page describing how you can Become a Christian. 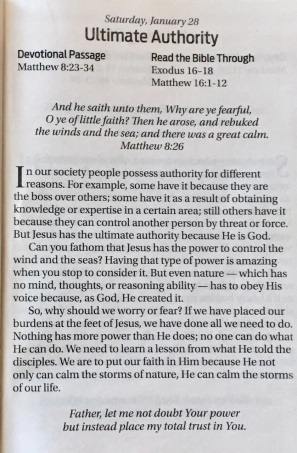 Jim Davenport resides in the USA in Northeast Georgia, is a member of a Southern Baptist Church and is a retired Christian business man. Jim and his wife Charlotte have one son and daughter in law, Keven and Amy, four grandchildren – Ashlyn (Davenport) & Josh Murphy, Mason & Rebecca (Knight) Davenport and four great-grandchildren. Jim and Charlotte own a mountain get-away home located on Lookout Mountain in Alabama where they spend many spring, summer and fall days working in their raised bed organic garden. Jim has served as a Deacon and Trustee in his local church most of his adult life and on the Executive Committee and Finance Committee of the Board of Trustees of Shorter University, an intentionally Christian institution located in Rome, Georgia. Jim has a passion for the word of God and has always believed that Christian principles should guide every aspect of his life. He also loves Christian music and often served as a tenor soloist in his church. One of the highlights of his life was the nearly 20 years he spent singing with The Good News, a Southern Gospel quartet. Jim served as an Information Technology professional his entire working career of 50 years holding senior positions in and consulting with hundreds of world-class organizations in the United States, Canada, Europe, Central and South America, Australia and New Zealand. Jim remains as President and CEO of InfoSys Solutions Associates, Inc. and is a retired partner of IT Governance Partners, LLC, both of which are “Trusted Advisor” technology and business consulting firms. Jim has authored a number of books available at www.jimdavenport.me/jims-books. His blog has ben read by readers from more than 170 countries. Jim holds both a BS and an MS in Mathematics from Georgia State University in Atlanta, Georgia and completed Management Development Training at Emory University in Atlanta, Georgia.
View all posts by jimdavenport →
This entry was posted in Bible Studies, Christian Devotions, Uncategorized and tagged christian devotions, devotions, eternal life, hope, Horatio R. Palmer, Jesus is the Answer, Mary A. Barker, Master the tempest is raging, Matthew 8:24-28, O you of little faith, Peace Be Still, storms of life, The Sermon on the Mount, the winds and the waves obey. Bookmark the permalink.