Of all the names ascribed to Jesus in the Bible, perhaps the most significant one is the “Lamb of God.”  Without the fulfillment of the role of Jesus as the perfect sacrificial lamb, there would be no eternal forgiveness of sin.

In accordance with the Old Testament Law commanded by God, lambs and other animals were to be offered as a sacrifice for the outward and temporary cleansing and forgiveness of sin.  Why?  As the writer of Hebrews records, “the law requires that nearly everything be cleansed with blood, and without the shedding of blood there is no forgiveness” of sin (Hebrews 9:22).  Through the animal sacrifice and the shedding of its blood, man could experience the forgiveness of sin.  However, the forgiveness was only temporary and the sacrifices had to be offered over and over. The sacrificed animal served as a substitute for the sinner and a foreshadow for the Lamb of God that would be the ultimate and perfect sacrifice for ALL of man’s sins. 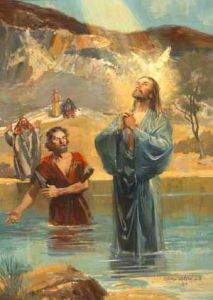 John the Baptist was God’s appointed forerunner of Jesus.  He preached repentance from sin and water baptism as an outward sign of that repentance.  John also taught that there would be one coming behind him that would be the long promised Messiah.  How did John know for sure that Jesus was the Messiah sent from God? Scripture records that Jesus requested that John baptize Him.  As Jesus came up out of the water the spirit of God descended upon Him like a dove and God spoke from heaven saying: “This is my beloved Son, with whom I am well pleased (Matthew 3:13-17).”  This absolutely confirmed to John that Jesus was indeed God’s perfect and ultimate sacrificial substitute, the Lamb of God!

John 1:29 (ESV) –  The next day he (John the Baptist) saw Jesus coming toward him, and said, “Behold, the Lamb of God, who takes away the sin of the world!

Near the conclusion of His earthly ministry Jesus was brutally crucified on the cross of Calvary.  But in reality, Jesus sacrificed Himself.  As the Lamb of God, Jesus shed His own precious blood as the perfect sacrifice for our sins.  On the third day Jesus was resurrected from the dead miraculously leaving the tomb where was buried, conquering forever sin and death.  From that day forward and forever more, Jesus was and is the only mediator between God and man (1 Timothy 2:5-6).  Animal sacrifice for forgiveness of sin would no longer be necessary.

Peter said this about the sacrifice of Jesus:  “For you know that it was not with perishable things such as silver or gold that you were redeemed from the empty way of life handed down to you from your forefathers, but with the precious blood of Christ, a lamb without blemish or defect. He was chosen before the creation of the world, but was revealed in these last times for your sake. Through Him you believe in God, who raised Him from the dead and glorified Him, and so your faith and hope are in God (1 Peter 1:18-21).”

Thanks be to God!  Jesus, the Lamb of God, paid the price for ALL who repent of their sins and trust Him as their Savior and Lord (Romans 3:23, Isaiah 53:6).  How about you?

Holy Father, thank You for sending Your only Son, Jesus, as the Lamb of God that through His sacrifice we may be saved from our sins and spend an eternity with You in Heaven. Amen and Amen.

Jim Davenport resides in the USA in Northeast Georgia, is a member of a Southern Baptist Church and is a retired Christian business man. Jim and his wife Charlotte have one son and daughter in law, Keven and Amy, four grandchildren – Ashlyn (Davenport) & Josh Murphy, Mason & Rebecca (Knight) Davenport and four great-grandchildren. Jim and Charlotte own a mountain get-away home located on Lookout Mountain in Alabama where they spend many spring, summer and fall days working in their raised bed organic garden. Jim has served as a Deacon and Trustee in his local church most of his adult life and on the Executive Committee and Finance Committee of the Board of Trustees of Shorter University, an intentionally Christian institution located in Rome, Georgia. Jim has a passion for the word of God and has always believed that Christian principles should guide every aspect of his life. He also loves Christian music and often served as a tenor soloist in his church. One of the highlights of his life was the nearly 20 years he spent singing with The Good News, a Southern Gospel quartet. Jim served as an Information Technology professional his entire working career of 50 years holding senior positions in and consulting with hundreds of world-class organizations in the United States, Canada, Europe, Central and South America, Australia and New Zealand. Jim remains as President and CEO of InfoSys Solutions Associates, Inc. and is a retired partner of IT Governance Partners, LLC, both of which are “Trusted Advisor” technology and business consulting firms. Jim has authored a number of books available at www.jimdavenport.me/jims-books. His blog has ben read by readers from more than 170 countries. Jim holds both a BS and an MS in Mathematics from Georgia State University in Atlanta, Georgia and completed Management Development Training at Emory University in Atlanta, Georgia.
View all posts by jimdavenport →
This entry was posted in Bible Studies, Christian Devotions, Uncategorized and tagged 1 Timothy 2:5-6, baptism, baptism of Jesus, bible studies, christian devotions, devotions, God, Hebrews 9:22, Isaiah 53:6, Jesus, John 1:2, John the Baptist, Matthew 3:13-17, Messiah, names of Jesus, perfect sacrifice, repentance, Romans 3:23, sacrificial lamb. Bookmark the permalink.